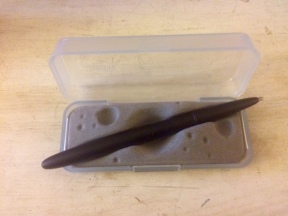 Fisher Space Pen is a company well known for their pens that write nearly anywhere and anytime, like underwater, upside down, or in freezing and burning temperatures. One of their best selling items is the bullet pen, which is a pocket pen with a small body and a large cap. It writes relatively thick, an the point is considerably large. The pen comes in a case with a moon like holder, and it pops out when you pull it. The cap takes up about 3/4 of it, and to remove it simply pull it off of the pen (the same as all caps). Post the cap by pushing it onto the back, NOT twisting, and it will become the length of a regular pen. There is no grip (on the matte black version, at least) but the pen still feels nice to hold. The only downside is that it looks a little dull, which is barely even a downside. This pen costs about 15-20 dollars. Overall, I give this pen five stars, because it writes well and works incredibly well as a pocket pen. It is a great addition to my collection.

This site uses Akismet to reduce spam. Learn how your comment data is processed.